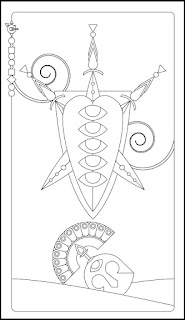 This drawing originally started as "The Soldier" and went through a lot of iterations as I tried to work it out. Originally, it was to be a literal representation of a soldier, a Roman Centurion, for which I would again borrow from the suit of Swords I'd created for the Spinoolean Tarot. My friend Steve helped me work through a lot of possibilities which you can review if you'd like after the jump.

This is a motif I will likely visit again as I have other soldier-related cards on my list. 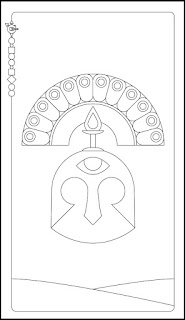 The helmet didn't really change after I'd finished working on it. 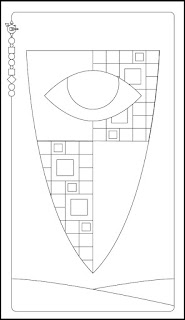 The shield went through a lot of changes, however. This one had a kind of Mondrian feel to it I kind of liked, but decided I didn't want to include the helmet. 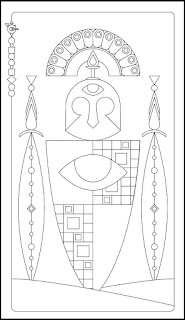 The first collage of all the elements I wanted to use, but it seemed obvious and not as interesting as I'd hoped. 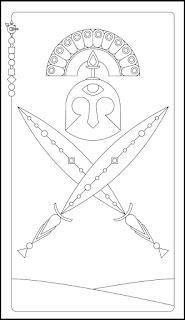 This one is very much a Two of Swords, with the crescent moon replaced by the helmet. 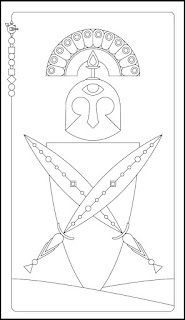 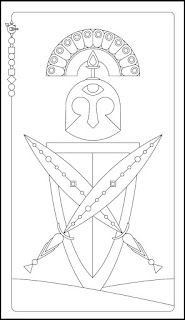 Third verse, same as the second with an evolving shield. 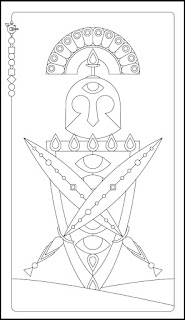 Last stab at a more complex design with a more highly ornamented shield. It was at this stage that I decided upon using the Three of Swords heart shape instead of the shield and moving the helmet to the ground and turning it at an angle like a battlefield artifact.

I'm still not sure I'm happy with the design, but the Three of Swords is a motif to which I seem to keep returning.