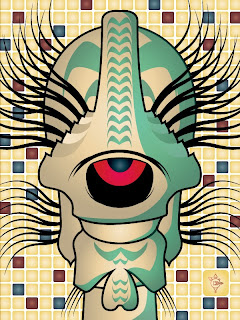 Sometimes I don't do as I'm told. There's a Skull Decoration Challenge that I decided to play with. It was fun. What I wound up with was nothing like what the rest of the artists did. Specs, who need's 'em?

As I continue to research my project, I keep finding interesting connections. I was already chasing Puccini, Verdi, and Toscanini around, then I found out that Gustav Mahler and Toscanini wound up in charge of the Metropolitan Opera at the same time, with fractious results. Mahler, it turns out, was a good friend of Richard Strauss. Strauss wrote an opera entitled Salome, based on the play by Oscar Wilde. Wilde is also on my list. And all of this (mostly) within the 1895-1905 time frame that is my target for the story.

If I had to choose an era in which to live other than this one, I know where my time machine would take me!

One wall in my bedroom is completely unadorned. I'm shopping for a world map, pushpins, and yarn. Let the giant creepy, stalker, obsession wall begin! There will be photos...someday.
Posted by John J Gabarron, IV at 10:22 AM

Thanks, Mike! I really hadn't thought about a story; I was just pushing pixels around. I like where you're going though. Where do you think he's from? Maybe he was sent here to establish a trade route, or find a new power source. Perhaps he was fleeing the tyranny of his race, or he was an exiled tyrant...

When I read "trade route," I thought of him being a trader, kind of like Mudd in Star Trek. I saw him with more than 2 arms. Maybe 4.