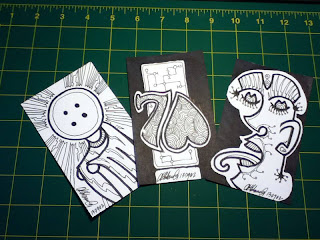 It's been a long time since I've done any drawings by hand, except for the occasional sketch. For the last month I've been on holiday from creating new art (or revamping old art). After drawing hundreds of Tarot and Tarot-like cards in Adobe Illustrator and beginning the process to finalize the Spinoolean Tarot for a stab at publication, I was ready for something else.

Alas, I have no idea where to go. I have some ideas -- I'm never short on ideas -- but I don't feel particularly jazzed about any of them:
And so forth. I could spend every waking hour on these projects and not finish them all in my lifetime. And that doesn't include new ideas.

I will note that, in drawing the three pictures I just finished, I feel revved up. I retired (threw away) two used-up pens in their creation. I took the photo above and pushed "post" to Facebook and immediately had an idea for another drawing.

Oddly, I'm not too old for this. Stay tuned.

Email ThisBlogThis!Share to TwitterShare to FacebookShare to Pinterest
Labels: 2013, pen and ink

Get some crayons and draw on one of your walls. :o)