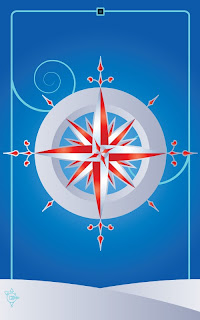 I continue to tinker with the Spinoolean Tarot, readying it for publication (if someone will buy it to publish, that is). My most recent inclinations have been to simplify the cards even more than I had previously, to change the colors around (the Major Aracana originally featured a yellow background, which I'm now trying with Wands and Cups to see which I like better).

In the Rider-Waite deck, this is one of the busiest cards. In addition to the Wheel, it includes Hebrew and alchemical characters, clouds, four angelic figures, a sphinx, and a devil. Since one of my goals has been to remove all recognizable symbols, I originally chose only to use the Wheel -- represented as a very simple wind rose -- and the sphinx and angel. For this version, I have retained only the wind rose, although I have added some ornamentation to it. You can see the original version here.
Posted by John J Gabarron, IV at 9:00 AM