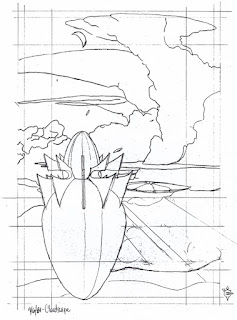 When I was a senior in high school, I had an idea for an epic science fiction adventure that took place on a giant plateau on another planet. Later, as the story became even more grandiose, the plateau became a living island floating in the clouds of a gas giant (thanks for that one, Carl Sagan).

As I mentioned previously, I have yet to complete a draft of this story, though I did right a treatment for it just in case. One of the artifacts that I mentioned in the linked post is the Fortress. In the story, no one knows it's origin, and it has been the source of much advancement in that light shining through it's many windows reveals advanced mathematical equations, artistic inspiration, and such like. It is pivotal in the climax of the story.

Every time I see this sketch -- enhanced in Photoshop for this presentation -- I can't believe that I drew it. It is so far outside of my normal style. I run across it every so often and promise myself that I will finish it with ink and color, and then I forget about it again. I must quit doing that.
Posted by John J Gabarron, IV at 8:21 PM

Email ThisBlogThis!Share to TwitterShare to FacebookShare to Pinterest
Labels: 1981, King of Heaven, novel