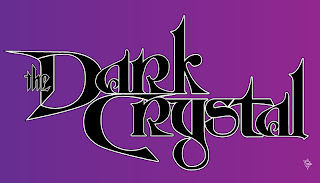 Early in 1980, I had just moved to Kansas from my lifelong home in Denver. I was on the threshold of getting married, considering continuing my education, and trying to find a decent job. I was 20.

I was also questioning my worth as an artist.

I decided -- in my typical, even for the time, way -- that I would propose a test for myself and if I passed, I would continue to draw. If not, I'd find something else to do.

I had just read an article in a magazine about a movie that Jim Henson was working on, a movie that would feature no human actors at all and would be an epic fantasy. It was due out in May 1980, so I had time to execute my test: I would design a logo for the film and hang my future upon it.

Well, the movie was delayed from May to November. In October, my wife and I made a weekend trip to Denver and, as part of our adventure, we went to see a movie. I have no idea which one, but when I entered the theater, I saw the words The Dark Crystal on the screen -- for one second. The theater was running a slide show of upcoming film posters. I sweat bullets waiting. Seriously, I was pretty worked up.

When the slide for Henson's movie finally came back around, I was surprised. Flabbergasted, even. There were stylistic differences, of course: mine was smooth like crystal and the official logo was tattered like parchment. The word "The" was given more prominence in theirs than in mine.

But -- and this was tremendously important -- I liked mine better. That was unexpected. I was so convinced that I would fail, that it never even occurred to me that I might succeed!

Anyway, writing this out makes it seem trivial now, but at the time it was huge for me. I'm here today, obsessively hammering out my weird little art projects, all because of one movie's promotional materials. I suppose human hopes and aspirations have been pinned on less, but I can't imagine how.

Email ThisBlogThis!Share to TwitterShare to FacebookShare to Pinterest
Labels: 1980, 2013, Angst

I'm immensely pleased to see this posted - you often reference it, but until now I only had ideas of what you meant.
Aughra: "End, begin, all the same. Big change. Sometimes good. Sometimes bad."