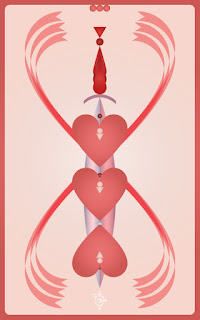 When I started working on this project, this was the first image to leap to mind. It's kind of the opposite of the Three of Swords in the Tarot, in which three swords skewer a single heart.

Last night I had an idea and wound up inventing how the rest of the numbered suit cards will appear and what colors they will be. Playing some games with this deck will be complicated by the color scheme since there's only one red suit now. Cue the maniacal laughter.
Posted by John J Gabarron, IV at 3:05 PM