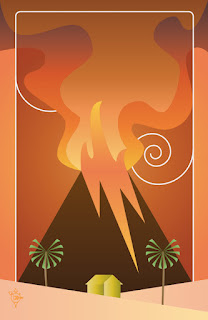 A long time ago, during the heyday of trading card games like Magic: The Gathering, I had an idea for a fortunetelling deck like the Tarot, but with interchangeable suits and Major Arcana. Working on the Spinoolean Tarot reawakened that idea and so, a couple of weeks ago, I brainstormed up almost 300 card names. I'm still working out what the suits will be and how I will portray the images, but The Volcano is the first that found expression.

I'm calling what follows sketches since they're far from final and are the rough drafts for what will come. What I hope to eventually achieve is a 78-card deck, hand-drawn in pen and ink in the style of Pamela Coleman-Smith -- the original illustrator of the Rider-Waite Tarot -- where suits or cards may be swapped to further customize and broaden the vision and usefulness of the Tarot.

Arrogant? Probably, but that won't stop me from trying.
Posted by John J Gabarron, IV at 5:49 PM

I think it's brilliant. Do it! I know it'll be a fantastic addition.