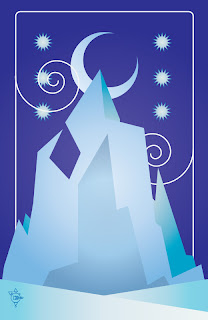 Late in 1986, I started drawing what I called The 1987 Universal Destruction Coloring Calendar. I finished it in February. So much for making a Christmas gift of it that year.

I made 12 illustrations -- including this one and The Volcano -- each portraying a different grisly end of the world. Some were more successful than others. November's was called "Figure 11. The Ice Age" and looked similar to this, though my expertise in pen and ink was very limited making the illustration quite clunky.

I was tempted to add a cityscape or a swimming polar bear to the foreground, but didn't want to clutter the image. When I do the pen and ink version of this sketch, I will further explore those ideas.
Posted by John J Gabarron, IV at 8:03 PM