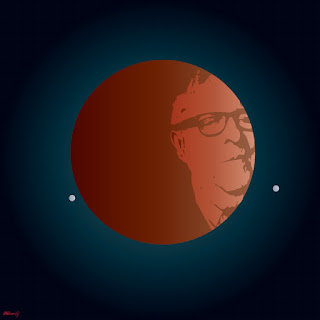 An excerpt from The Martian Chronicles:

"Well," said the captain, "it's simply that we never thought we'd find a thing like this on Mars."

"And now you've found it. I dare say there's lots on every planet that'll show you God's infinite ways."

"Is this Heaven?" asked Hinkston.

"Nonsense, no. It's a world and we get a second chance. Nobody told us why. But then nobody told us why we were on Earth, either. That other Earth, I mean. The one you came from. How do we know there wasn't another before that one?"

"A good question," said the captain.

A dear old friend of mine who never knew me died today, leaving a hole in the world that no one else can ever fill. My Dad introduced us when I was a kid and I was ever in awe of the places we went together -- from October to Indiana to Mars. I will miss you dearly, Ray.
Posted by John J Gabarron, IV at 4:03 PM