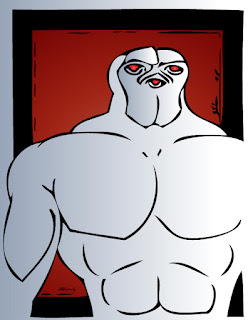 Excerpt from Lightspeed Mary: In the Pink:

Then we could see them: huge stone Golems with three eyes in big, squarish heads, enormously muscled torsos, movin on sinuous snaky tentacles, with huge arms ending in three shiny, scimitar-like talons converging on our adversary.  He squeaked, threw the treasure at one of them and ran for the exit.

When I returned from my first trip to England in 1995, I has still pretty stirred up about what I'd seen there, in particular Stonehenge and Avebury. I'd also been highly influenced by a limerick that I read in a comic book as a kid:

There once was a woman named Bright
Who could travel much faster than light
She departed one day
The Einsteinian Way
And returned on the previous night!

I didn't find out until much, much later that Alphaville recorded a musical version of one of the poem's many variations. Anyway, Stonehenge and Lady Bright converged in my brain and a series of short stories emerged, the first ending with our three heroes -- Mary Bright, Snide Clyde, and Nero the Hero -- in a confrontation with the villainous Bart Ligeti and three gigantic golems at an alien ruin that Mary named (modestly) Brighthenge.

So, at some point along the way, this illustration emerged, drawn with black marker on a sheet of lined yellow paper. For this version, I used a low-resolution gif converted to vectors and then colored. In 2006 I tried a few different coloring techniques, just playing with the illustration. With a few more tweaks, those variations might turn up here eventually.