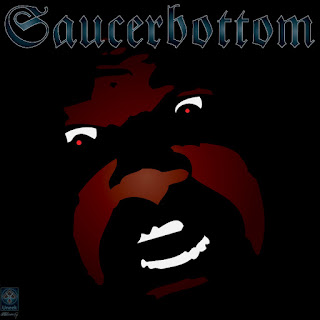 Saucerbottom's self-titled third album on Uneek is a giant step backward for the artist. While there are a few blossoms amongst the debris, by and large Saucerbottom is an artistic failure. With raucous songs like "Plastic Riot" and "Unkempt Wasteland" vainly stabbing at 1980s hair metal glory, the record becomes uneven...and that's being gentle.

Amid the guitar noise and shrieked chorus of "Ambient Playground Murder," (You can't have my bones for toys/I'm not like all the other boys), one can hear a children's chorus singing a lullaby. No kidding. What Saucerbottom was thinking, I have no earthly idea.

Whereas much of the record is discordant and unpleasant to the ears, the brief synth-pop ballad and first single "Vilify" stands as a testament to Saucerbottom's vocal and musical prowess, hearkening back to his first album, Catastroph. Equally, the acoustic neo-country stomp "Ragamuffin Ballroom Massacre" shines as a lyrical triumph (Your heart, my heart, our beautiful hearts/Ripped on the dance floor in hundreds of parts/Sing for the children and sing for the day/And fiddle and dance as our souls drift away) over strummed guitars, pedal steel, and sampled cowbell.

I wish Saucerbottom success with this record, but personally, I can't listen to it. If the label hadn't provided me a copy for review, I would have stolen the two songs I like from the internet; it's my hope that the failed sales for this album will snap Saucerbottom back to his senses. Another album like Whirr and Hide would be welcomed over this dreck.
Posted by John J Gabarron, IV at 5:50 AM