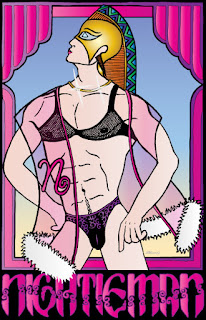 This is the perfect drawing for April Fools' Day.

Okay, long story: on one of the rare occasions when members of my family have visited me here in my ever-wintry isolation, my sister and I went shopping at Ridgedale Mall. Now, I have an unerring knack for entering department stores through the ladies' "unmentionables" department, and it wasn't any different that day. Standing right by the door of JCPenney was a mannequin wearing a filmy teddy, her arms thrown above her head as if she were about to take flight.

I looked from the mannequin to my sister and said, "It's a bird! It's a plane! It's Nightieman!" And then I burst out laughing uncontrollably. My sister started to walk further and further away from me as I continued to howl with glee. Going through my mind was the story for the Nightieman comic, issue number one, where he gallantly (and gorily) died at the end. In issue number two, he died similarly, etc. I saw glimpses of movie trailers and music videos. I was in hysterics.

When I finally regained control of myself about five minutes later -- after I wiped the tears of joy from my eyes and my beloved sister decided she could dare to be associated with me again -- we continued our shopping adventure.

Some time later, after my sister had returned home and we were on the phone, she reminded me of Nightieman. How I had let him slip from memory, I have no earthly idea. After our chat, I drew him and I'm certain I was grinning like a mad fool the entire time.

I'm not sure what about this drawing I like the best, whether it's the lettering or his magnificent Art Deco cowl, but this drawing has continued over the years to give me utter, inexplicable joy every time I see it.
Posted by John J Gabarron, IV at 8:28 AM