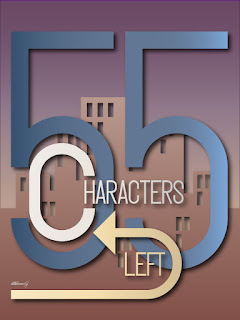 This is the cover of the first of a long series of murder mystery novels. Excerpt:

There were fifty-five characters left when I woke up that cold and dreary day. It was the same as every other day in Big City, dark and cold, wet and miserable. I had gone to bed last night after one drink to many. My head was pounding in time with the neon sign outside my window, just like yesterday. Just like tomorrow.


Lulu was her name. She was a vixen and last night the police found her in an alley. Her eyes were open and the rain made her look like she was weeping. It wasn't until the flash of the lightning that you could see the halo around her slightly smiling visage. It was a halo of her own blood.


Her murderer had been working for a while by then. None of the victims had anything in common that we could discover, but it was clear that they all shared the same killer. Each time he left a note next to his victim. He was counting down. The note in Lulu's hand said, "55 characters left."


The killer had started at one hundred.
Posted by John J Gabarron, IV at 6:10 AM

Email ThisBlogThis!Share to TwitterShare to FacebookShare to Pinterest
Labels: 2010

WHY aren't you noveling??? This is GREAT!!