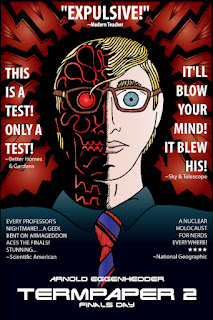 The first pass at this drawing was done in 1991. I drew a new background and lettering in 1992 for my boss's presentation. This is probably the dumbest idea I ever had...if you don't count the Vanilla Mice cartoon.

Originally, the lettering was done with a calligraphy pen. The background element was only on the left side so I reflected it on the right. In the original, the review quotes were only on the right side. There were two sets of quotes, one from the 1991 version and the other from the 1992 redraw; they are all included in this version. My original hand-drawn title typography was replaced with Terminator Real NFI.
Posted by John J Gabarron, IV at 5:20 AM