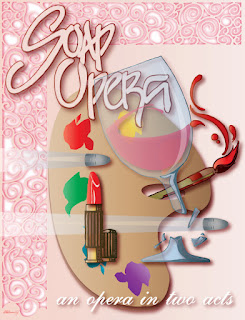 In 1979 I wrote an epic poem (that is, a poem telling a story) entitled Vignettes. It told the story of three lonely people who went into a bar one night, poured their hearts out to the bartender, and then died abruptly in a murder-suicide. Yes, I was charming in those days.

Several years later, I decided to flesh out the story and adapt it as an opera (that is, a lot of poems telling a story set to music). I wrote bits and pieces over the years, but I didn't finish it until I was winding up therapy after my marriage ended. In 1990 my life was about to move on: I was moving to a new city for a new job. I decided that I would close that chapter of my life by finishing my opera.

In 1991, I shipped my handwritten manuscript to my sister since she volunteered to type it and designed a cover for the book I intended to make  when I got the typed copy back.

An excerpt from Soap Opera:

(Michael, an artist and notorious drunk, has gone to the bar to find inspiration on the night before a deadline.) 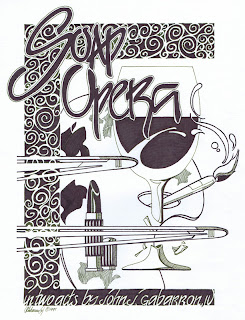 Coloring this drawing was a nightmare. I had to undraw the bullet trails that went over every other element, which meant everything they went over had to be redrawn. The palette was never a complete element, so it had to be created in Illustrator. I did some work on the logo years ago, but I still had to undraw it from the original and create the swirls in the border. I had to separate the glass and stem shards. Then came the coloring and adjusting of the elements. The background color was a happy accident and I dropped a copy of it behind in red for a highlight. I titled the glass and converted what used to be a highlight to be part of the sloshing wine inside. In the final colored version, there are no black lines. I removed the original typography at the bottom and replaced it, removing my name. In all, there was as much labor as there was on The Magician (a lot, that is) and I'm nearly as happy with the results.

PS The opera remains unfinished since I'm not a music composer. If you know someone who wants to write an opera using my lyrics, let me know...
Posted by John J Gabarron, IV at 7:06 AM

Email ThisBlogThis!Share to TwitterShare to FacebookShare to Pinterest
Labels: 1991, 2012