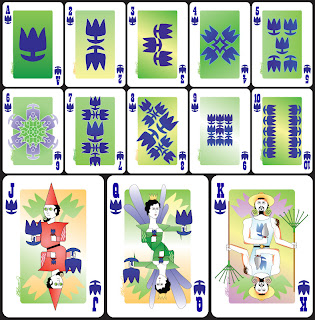 Tulips is the fourth and final suit from my Ptero Poker deck. It's the last suit I worked on and the face cards include a garden gnome, a fairy queen (I call her Mab), and the Gardener. Of all the face cards, I think that I was most pleased with these three overall.

The only adjustment I made to this suit was to remove an errant Tulip from the Queen's waist that had previously escaped my notice.

Recently I've started working on another deck, but with with taller cards. I've completed the suit of Hammers, of which I've previously published the King. I'm not sure about the remaining suits, or if there will be only four. Some time ago I wrote a story that included a six-suited poker deck and it might be fun to see how the dynamics of that configuration work out.
Posted by John J Gabarron, IV at 3:50 PM