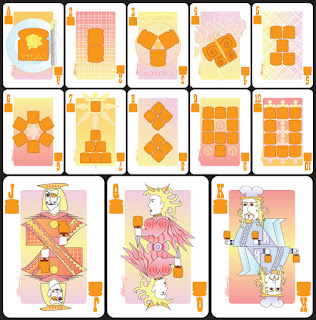 Everyone goes on and on about the magnificence of bacon, but that's how I feel about toast. I judge restaurants based on their toast!

When I was imagining this project, I'd already accidentally invented three of four of the suits in 2005: as a quick morning drawing, I drew a blackjack (Ace and Jack) -- the Ace of Lunes and the Jack of Tulips, with the Jack emoting a single tear. That left the fourth suit to be invented. So I started thinking of shapes. Bread is a shape.

The original Jack for this suit was very Hoyle-esque so I discarded it and drew the Jack that I subsequently redesigned as the Jack of Tears, since that  better suited his Cyclopean nature. It was more or less a simple trade, since the one-eyed Jack from Tears was modified for Toast.

I include here my first version of the Four. I originally decided that it was too ornate and replaced it with something more geometric. Today I came to my senses and included the first draft.

Having the King turn out to be a baker brought me immense joy, and he and the Queen of Lunes are the only face cards portrayed in their full figures.

I chose the Ace of Toast to be the signatory Ace like the Ace of Spades is in most poker decks, so it bears the name "Ptero" and my pterodactyl logo.
Posted by John J Gabarron, IV at 10:45 AM