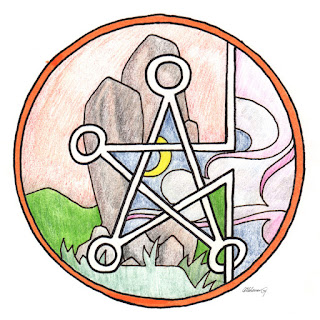 I have never worked much in color, preferring the starkness of black and white. Also, I never thought I was particularly good at color, so I shunned it. That hasn't kept me from dabbling, however, and my sketchbooks are rife with color thumbnails for ideas. I have bunch of color sketches for my novel, The Empty Space.

This drawing had nothing to do with the Tarot project I've been working on for most of my adult life, but clearly it was influenced by those themes. Unfortunately I didn't have the good sense to put a date on it, so I can only guess when I drew this, probably in the late 1980s or early 1990s.
Posted by John J Gabarron, IV at 5:48 AM