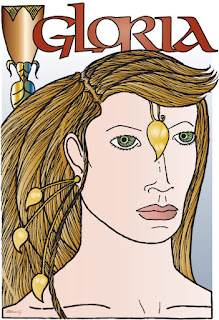 Everyone who has ever seen this drawing who knows me at all has asked me, "Who is Gloria?"

When I started drawing the Tarot, I set Cups and Swords as opposites and used bits of Latin in their designs. Many of the Swords are inscribed with quotations from the Requiem, or Mass for the Dead. The Requiem doesn't usually contain celebratory elements, so I employed the term "Gloria" on some of the Cups.

In coloring this drawing, I replaced the original hand-drawn typography with the Omnia typeface since it was extremely close to the original. I also moved some elements in the Queen's face (notably her lips and chin and a slight shortening of her nose). I finished coloring this many days ago but had to let it rest while I decided what color her hair should be: blond or black, but I settled on blond to keep with the lightness of the suit of Cups.
Posted by John J Gabarron, IV at 11:41 AM