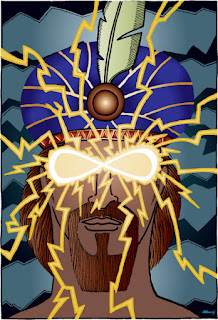 I've always envisioned "The Magician" as "The Juggler" and have done alternate illustrations that show the vision more succinctly than this version did. I've always been enamored of the idea of this card, but was woefully disappointed by it's realization. With my skill at the time, I just couldn't bring what I saw in my head to the paper. Not in black and white anyway.

The colored version of "The Magician" represents the most "undrawing" I've done on any single illustration so far. The elements reside on no less than six layers in the Photoshop file and 30 in Illustrator. I extracted the suit elements (Torch, Sword, Pentacle, and Cup), lightning, feather, and lemniscate first. After working on those parts for a while, I realized that I also needed the turban and it's highlights, as well as the brim (of which I had to draw a good portion). Then I realized that I needed the background as a separate element, and then the head and and neck. In all, I spent about 12 hours undrawing and drawing new elements, and coloring this drawing. The original was probably sketched and inked in less than two hours.

Once I had all of the components created and colored in Illustrator, I "turned off" the suit elements and realized that the drawing was finished. I have not been so impressed with the difference that 20 years can make as I have with "The Magician." It's been a very satisfying journey to finish this drawing at last. 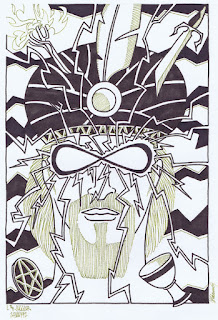