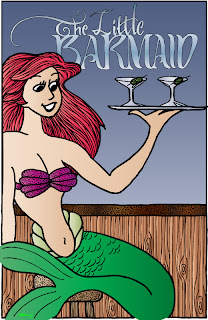 I guess all Hollywood actors have to start somewhere, even the animated ones.

"The Little Barmaid" was drawn for a presentation that my boss at Musicland was giving to district and store managers. It was afterward that the terror began...

I was told at the time that Disney was notoriously protective of their properties (which is undoubtedly still true). Since the drawing was never intended to be published, I didn't figure that I'd ever be at risk for trouble -- until the head movie buyer for the Suncoast division (for which I worked at the time) decided to show it to his Disney representative. I was told that the rep laughed when he saw it, thankfully. I was also shown several parody video covers for the "Spot" video series done by the Disney artists (e.g., "Spot Bites the Big One"). At the time, the series had been a huge disappointment, sales wise.

Coloring this image was very straightforward. This time I liked my own typography, amazingly enough!
Posted by John J Gabarron, IV at 6:28 AM