A History of the Ptero Tarot 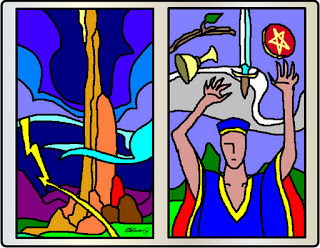 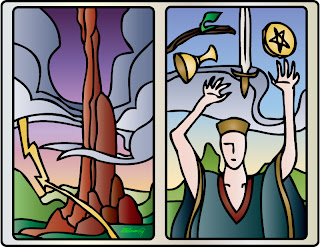 The first pair of images were drawn and colored in Microsoft Paint in 1999. In a rare instance of good planning, I saved outline versions of both The Tower and The Juggler (aka The Magician) as sketches -- that is black outlines on a white background.

Today I imported the sketches into Adobe Illustrator and applied gradients for color. Illustrator smoothed the jagged lines from the original paint files which I like much better, and the softer gradients give the cards a much less cartoony feel. Oddly, both versions have their own vitality, which was something I wasn't expecting.

So much for the pretentious artist commentary. What do you think?
Posted by John J Gabarron, IV at 7:15 PM