On taking Time to catch up 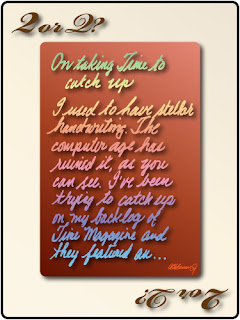 I used to have stellar handwriting. The computer age has ruined it, as you can see. I've been trying to catch up on my backlog of Time Magazine and they featured an article on the lost art of penmanship, headed with an illustration stating, "I'm 26 years old, and I cant write in cursive" (sic). Amongst the article's points of interest is the revision of the Zaner-Bloser cursive manual in 1990 to remove the few remaining cursive character flourishes (I guess I'm 19 years late to the party on that one). Also included in this issue of Time (August 3) were articles on Zimbabwean politics, the relationship-threatening Libby pardon debate between former President Bush and former Vice President Dick Cheney, and an article discussing preterm birth and infant mortality. In all of this, I found the two-page spread on the decline of handwriting the most disheartening.

I remember how my first grade teacher, Miss Thurston, fawned over my handwriting. I was consistently one of the best in my class and I remember quite clearly when I became lazy about it and Miss Thurston wondered aloud to me about what could have happened because my handwriting quality had slipped. I took her criticism to heart and redoubled my effort on my penmanship exercises, regaining my status as one of the best.

Somewhere after that, between cursive in second grade with Miss Hamblin (who took over for Miss Heist after a skiing injury) and high school, I fell in love with letters. "R" and "Q" were always my favorites. I have played all of my life with letter forms. You'd think that somewhere in there I'd have become a typeface designer, but no. I have notebooks full of explorations for head letters and even an alphabet I designed for an as yet unwritten horror story that plays a key role in the protagonist's story.

It seems that our post-millennial lives are becoming ever simpler. The flourishes and curlicues and loop-the-loops are gone from what this generation's children are learning. And they're being given only half the time to learn their handwriting, according to the article. In our modern society, it's more important that we know the mechanics of a keyboard than those of a pen. I can't be too judgmental though. I somehow got into a typing class (that's what we called "keyboarding" in the 20th Century) as a sophomore in high school. I was surrounded by juniors and seniors. Of all of the classes I have ever taken, it has served me the most faithfully.

But at what expense? Look at my handwriting! What was my pride and joy just 43 years ago is now barely legible. And, funny thing, the handwriting of my child and the next generation of children will be even worse. We live in an age when we're giving up more and more art for the sake of "efficiency." You can see it everywhere in our culture. With the proliferation of micro-keyboards on cell phones, even touch-typing will become a thing of the past. Who'd have thought that the ultimate evolutionary achievement of humanity -- opposable thumbs -- is only to allow us to more easily accomplish the least significant and most pervasive technological task of our era: texting.

So yes, like Claire Suddath, the author of the Time article, I mourn the death of handwriting. It's yet another casualty of our headlong rush into so-called modernity. Hurray for us. Let me tell you all about it on my Twitter.

By the way, the legend on the card illustration reads "2 or Q?" Believe it or not, the post office can't tell the difference. Go figure.
Posted by John J Gabarron, IV at 5:05 PM