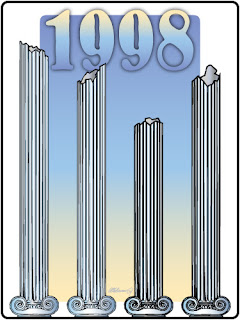 I've been having a round of nostalgic feelings. My daughter's visit ended yesterday, which had me experiencing lite feelings of loss and reflection. I subscribed to @ReliveApollo11 on Twitter and have been re-experiencing what it was like to follow a space mission back when every new rocket launched sent a thrill down the collective spine of Americans.

Then, on Twitter this morning, the top trending topic was "In 1998 I." So I tweeted my take on the topic, refined an illustration I was working on, and started writing this while watching The Open Championship on ABC with my boyfriend.

In 1998 I had been learning the Mac ropes on a computer graciously lent to me by a friend for about a year and decided to take the plunge and buy my own computer (a Motorola StarMax). Friends helped me install the the software I would need to bridge the gap from pen-and-paper artist and writer, to the new electronic medium of computer art. In 1998, I almost completely stopped using pens and paper. I have never stopped buying pens though.

I'm a peculiar artist, I guess. I've always wanted to be able to reproduce my drawings in any way and quantity I wanted. In addition, I never really learned to work with color on paper or canvas and this fed into my interest in being able to copy my work. Until the dawn of computers, reproducing color artwork had been hard to do. One could have prints made for a large fee, or settle for a photograph of the work. Neither of these appealed to me. Plus, at the copy center where I worked, I could have as many Xerox copies made as I wanted. 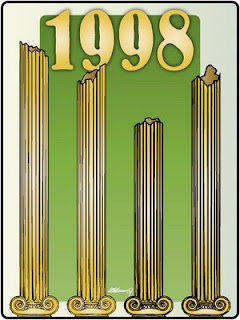 What I discovered with the computer (after a really long period of time) was that I could create my black and white drawings and then experiment with color to my heart's content, almost never to my satisfaction. Somewhere along the line it occurred to me that saturation was everything.

But that's an aside. I realized with today's trending Twitter topic, that in 1998 my first computer represented an unexpected and (at the time undesired) paradigm shift in how I created art. It changed, in a lot of ways, how I realized my vision. It introduced me to process-based creation -- something with which I had little experience. Just being introduced to a tool that I could use to easily edit and update text was everything. Being able to express my visual visions was in the electronic domain was showstopping!

But, as my computer-loaning friend pointed out at the time by naming the Mac he lent me "Hugh," I was assimilated in 1998 and my means of creating art changed forever. At the time, I thought that it had changed for the worse. It took a long time to master the new electronic tools, so much that my first real endeavors were so horrible that I spent more time writing than drawing. It took time, but eventually I arrived where I am today. I can build an illustration in about the same time on the computer as it used to take on paper. The vectors are better and more perfect than anything I ever made with a pen. And I'm learning about color. Finally.

And I wouldn't have thought about any of this if it hadn't been for my daughter. Oh, and Twitter.

Twitter may not be as dumb as I thought.
Posted by John J Gabarron, IV at 9:56 AM

Like any medium, one must filter through the riffraff to find the substance.